Did you know the truth really is out there … in Clayton?!

Today, kids (and adventurous Mums and Dads) can climb aboard a giant, 3.3 metre high UFO at the Grange Reserve in Clayton South.  It’s a brilliant feature of the expansive park on quiet and tree-lined Osborne Avenue that even grandparents and grumpy teenagers will all love to explore.  There’s a flying fox, a climbing wall, a tree house, amazing bush surroundings and more. Nothing scary or weird about that, right?

But hang on. Did we say giant UFO?  We sure did!

Yep, your little (and not so little) ones can climb aboard, play, slide, and even pretend to ‘drive’ to Mars and back at light speed.  And if you arrive at dusk, the flashing lights are extra creepy!

But there’s more to this story.  Much more.  Much, much more. 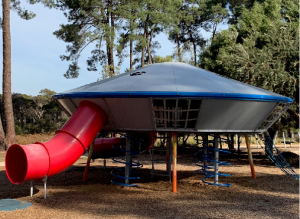 What on earth (and beyond?) is this UFO park all about?

Well, at this very place in 1966, something very, very strange happened that will forever mark Clayton’s history in the most mysterious of ways. And not for a strange flash of a moment, but for an incredible 20 minutes.

And it wasn’t just a single UFO aficionado who’d drank a little too many pints on that blue-skied morning who witnessed it. No fewer than 300 (that’s right, three hundred) students and teachers, including a full cricket team on the oval, lived to tell in astonishing detail the mystifying tale that went down in history as Australia’s largest mass UFO sighting.

It happened at about 11am on 6 April, 1966, and the ‘UFO’ (or, more specifically, the UFOs – plural) were spotted in incredible detail by scores of scared and bewildered kids and teachers of two separate Melbourne state schools.

What exactly did they see?
What they witnessed, we have to admit, is pretty hard to believe. Imagine looking up in a bustling group of people and spotting a silent UFO gently coming in to land in the field adjacent to you.  Then another. Then another. Everyone starts saying in bewildered tones: “What on earth is going on?” Then the screaming, shouting and running begins, prompting more and more witnesses to come outside to see exactly the same thing.

According to the many, many eyewitnesses, that is precisely what happened.

“For years and years we were made fun of” 60-year-old Joy Clarke, then just 12, told The Age newspaper. “You got told ‘How crazy were you? What drugs were you on?”

Another, Terry Peck, said she not only saw the flying saucers land, but also take off again and shoot off into the sky at incredible speeds.

“Look, it’s factual. I saw it. There must be something if all these people who are quite smart saw it,” she said.

And there are many, many, many others who tell exactly the same story. One recalls returning to the site the next day only to find it cordoned off, with men asking him not to talk about the incident.  Channel 9 footage of the 6pm news from that night has vanished- the film canister left empty.  Whispers suggest the US government was testing incredible technology that has also been reportedly spotted elsewhere in the world in the decades since.

Was it just a balloon?
A document in the National Archives says a silver balloon testing radiation levels from nuclear tests in South Australia blew off course and landed in Clayton South. A memo detailing the take-off of four balloon launches in 1966 show that they are still missing, so this is the closest we have to an “official” story.

But big questions remain. For instance, the balloon theory fails to fully explain why so many normal, intelligent people – like school science teacher Andrew Greenwood – are absolutely convinced they saw actual flying saucers.  And a flying saucer is not exactly a large, silver balloon.

“The planes were doing everything possible to approach the object”, Australian researcher James Kibel said in a recording.

“Every time they got too close to the object it would slowly accelerate, then rapidly accelerate and then move away from them and stop”.

And it’s not like it was a flash or two in the sky- the eyewitnesses said the entire event went on and on for more than 20 full minutes. The principal of one of the schools, for instance, came out to see what was going on only to return to the safety of his building and refuse to come back out. In the intervening days, weeks, months and years, there has been talk of a cover-up, witness intimidation, men in dark suits and various levels of storytelling, tales and speculation.

Grange Reserve Today
Today, we have the amazing UFO park on Osborne Avenue, commemorating the event that happened in 1966, with generations of Australians in Clayton acknowledging the account and pondering on what happened on this exact spot. Grange Reserve in Clayton also has 6.6 hectares of rare vegetation, making this reserve a must see.

If you want to make the historical Grange Reserve and the greater Clayton part of your lifestyle, get in touch with our team today to discuss the latest Clayton Real Estate opportunities.
Clayton is now also home to over 19,000 people, who have made the historical Grange Reserve their local walk. An upcoming area, Clayton is perfect for families, students and young couples. There are many amenities that Clayton has to offer that include shopping, festivals, public transport and universities.